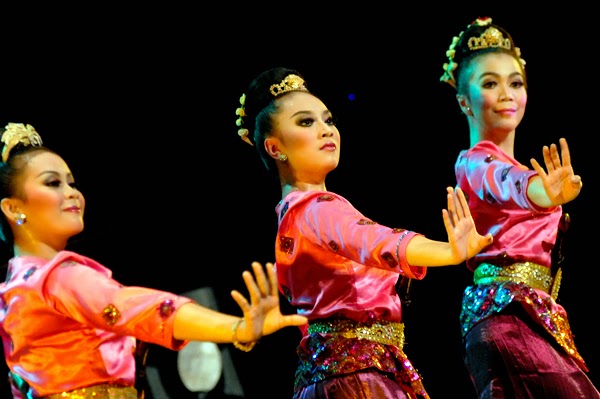 Jaipongan, also known as jaipong, is a musical performance genre of the Sundanese people in the Sundanese language of West Java, Indonesia. Jaipongan includes revived indigenous arts, like gamelan, but it also did not ignore Western music completely despite the ban on rock and roll. It used its sensuality and the sensuality found in a traditional village music and dance, ketuk tilu. However, many believe it is something purely Indonesian or Sundanese in origin and style. It is developed predominately from rural folk forms and traditions as a purely indigenous form. The rise of cassettes and films has led to the popularity of the musical form of jaipongan. It has spread from its home in West Java s Sunda, to greater Java and Indonesia. It can be seen as many regional varieties of gong-chime performance found through much of Indonesia. As also an urban dance form, it is based primarily on the village forms of ketuk tilu and on the Indonesian martial arts, pencak silat. The musical genre is largely influenced from ketuk tilu with traces of the masked theater dance, topeng banjet and the wayang golek puppet theater. Ketuk tilu is its biggest influence, as a traditional Sudanese musical entertainment form.

Gong-chime performance is characterized by such features as: use of an ensemble dominated by idiophones, metallophones and knobbed gongs. It is a stratified polyphony, with lower-pitch instruments playing parts of lesser density and all parts are structured colotomically around time-cycles. This can be found in traditional Indonesian gamelan. There is improvisation on certain instruments. The modes used are grouped into two broad types: slendro and pelog.

Ketuk tilu was a musical genre based off ritual and celebration in the villages of the Sundanese people, meaning three kettle gongs. It was known for complex drumming coordinated with equally dynamic solo female dancers. The music was performed for planting and harvesting rituals and later celebrated village life, circumcision and marriage, expressed fertility, and displayed sensuality, eroticism and even sometimes socially accepted prostitution. Ketuk tilu was very popular in the Sundanese villages, but the urban Sundanese considered it unrefined and inappropriate because the music involved males and females dancing together suggestively, or mixed dancing between men and ronggeng, or prostitutes. Ronggeng probably has existed in Java since ancient time, the bas reliefs in Karmawibhanga section on Borobudur displays the scene of travelling entertainment troupe with musicians and female dancers.

Jaipong is less strictly associated with ceremonial functions, but performances are common in the Rayagung festival month, and with circumcisions and marriages. The performances now have the character of secular social functions, attended by young and old, primarily for entertainment and socializing. Public performance is now extremely frequent especially in clubs or street performances.


The cassette industry and its boom in Indonesia helped popularize jaipongan greatly and promoted regional styles rather than hurt them. Many learned the dance through cassette rather than the performance. The mass media have made jaipong ubiquitous. It has created competition in the styles of the drummers among ensembles. It has also helped to bring about many dance schools, altering dance and its label on females in West Java.


The song repertoire of jaipongan is varied, and that is why it is better understood as an intertwined performance style of music and dance. Many songs are associated with ketuk tilu or other wide reaching regional varieties, not traditional gamelan. It consists of songs of more recent origin often composed for jaipongan. Song topics vary, encompassing amatory, moralistic, bawdy, topical and spiritual subjects, often emphasizing grass roots culture.
#Berita Daerah
Bagikan berita ini ke yang lain