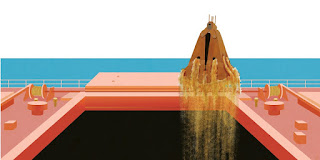 In the following article, Mr. John Wilson, Technical Services Asia, American P&I Club (Hong Kong Office), explains why nickel ore is considered as ‘the world’s most dangerous cargo'.
Between 2010 and 2013, six vessels that loaded nickel ore in Indonesia sank during their voyages to China, resulting in the loss of life of 81 seafarers. The cause of each casualty is thought to have been due to liquefaction of the cargo affecting the stability of the vessel, resulting in the vessel capsizing very quickly, sometimes within a matter of minutes. For these reasons, nickel ore has been described as ‘the world’s most dangerous cargo’.

Between 2010 and 2013, six vessels that loaded nickel ore in Indonesia sank during their voyages to China, resulting in the loss of life of 81 seafarers. The cause of each casualty is thought to have been due to liquefaction of the cargo affecting the stability of the vessel, resulting in the vessel capsizing very quickly, sometimes within a matter of minutes. For these reasons, nickel ore has been described as ‘the world’s most dangerous cargo’.

Nickel ore is a cargo that may liquefy if the Moisture Content (MC) exceeds the Transportable Moisture Limit (TML). The point at which the cargo can begin to act like a liquid is when the Flow Moisture Point (FMP) is reached: a theoretical figure set at 90% of the FMP to create a 10% safety margin.

Since 2011, the American Club have issued several Circulars and Alerts concerning the carriage of nickel ore and other bulk cargoes that are prone to liquefaction.

In recent years, much research has been carried out and regulations have been updated and amended, particularly the designation of nickel ore as a Group A cargo under the International Maritime Solid Bulk Cargoes (IMSBC) Code. In January 2014, the Indonesian government banned the export of nickel ore and the Philippines are now clamping down on the nickel ore mining industry due to environmental concerns.  There continue to be incidents of nickel ore liquefying onboard ships, whereby remaining a threat of a fatal casualty, particularly with the latest developments affecting the nickel ore mining industry in Indonesia and the Philippines.

Nickel ore exports from the Philippines and Indonesia

The intention of the Indonesian export ban was to stimulate the country’s mining industry to build smelter facilities to process the ore locally prior to export. Prior to the ban, Indonesia and the Philippines accounted for over 60% of the worlds nickel ore exports, with the ore mostly destined for ports in China.  By 2014, mines in the Philippines accounted for 50% of the worlds exports of nickel ore filling the Indonesian export void and remain the top nickel ore exporter in the world.

The same problems that have already been identified with the carriage of this cargo remain the same today.  Certificates being provided by shippers often contained inaccurate data about the MC, FMP and TML of the cargo being presented.

Furthermore, sampling methodology and laboratory analysis techniques used by the mines continue to not meet the standards set forth in the IMSBC Code. For example, when surveyors have been able to obtain cargo samples and had them analyzed at laboratories outside the Philippines, on most occasions the samples have ‘failed’ with errors in the moisture readings of between 8 to 10%.

Also, cargo continues to be brought to vessels and loaded onboard from uncovered barges. Shipowners’ representative surveyors have experienced being obstructed from obtaining samples of the cargo prior to it being loaded.  Furthermore, shipowners and the Master were pressured to load the cargo being presented, but the suitability of the cargo had not been properly demonstrated to be safe for carriage and in accordance with the IMSBC Code.

The shortage of surveyors attending nickel ore loadings in the Philippines has resulted in some ships being loaded without an onsite surveyor to monitor the process. In other cases, Masters or shipowners have been reluctant to follow the advice of the surveyor.

SOLAS and the IMSBC Code

The safe seaborne carriage of nickel ore can be enhanced by obtaining a representative sample amount of the cargo to be loaded, and this should be tested in a laboratory using established protocols.  Given the nature of the nickel ore material, it is very difficult to accurately assess the MC and the suitability of the cargo to load, based purely on the visual appearance of the cargo.

Since the implementation of the Indonesia export ban, various amendments to the IMSBC Code have entered force with the intention to promote greater involvement by regulatory bodies in export countries to enhance the procedures involved in acceptance and loading of solid bulk cargoes that may liquefy.

Possible resumption of exports of nickel ore from Indonesia

If or when the export of nickel ore from Indonesia will resume is not clear.  However, any reduction in exportation of nickel ore from the Philippines may result in the resumption of exports from Indonesia.  In December 2016, the Indonesian government announced a relaxation of the export ban for mines that have the required export permits. However, ships upon arrival to load in Indonesia have found the mines lack the required permits.

Government clampdown on nickel ore exports from the Philippines

In February 2017, the Philippine Department of Environmental and Natural Resources said it had ordered the closure of 23 nickel ore mines in the Philippines, as a means to combat the environmental degradation being caused by the industry. That number of mines accounts for half of the Philippines nickel production. The mining companies have appealed against the closures. There may be further reviews and during that time the mines can remain in operation, and it is therefore unclear at present exactly how and when the mine closures will take effect.

The need for extra vigilance now

In the meantime, the export of nickel ore from the Philippines continues as the mines operate under the uncertainty of their closures. Shipowners and charterers should endeavor to obtain verification from the cargo shippers to demonstrate that the mine has the required mining and export license.

As for Indonesia, the associated in-house testing laboratories have been dormant in conjunction with the current ban.  Consequently, there has been no improvement in the standards of equipment, training or operation of the laboratories.  Their understanding of and adherence to the requirements of the IMSBC Code may well fall short as a result.  Once again, shipowners and charterers should obtain information from the cargo shippers to demonstrate that the mine has the required mining and export license.

By John Wilson, Technical Services Asia of the American P&I Club's office in Hong Kong (SCBMCS)
views presented hereabove are only those of the author and not necessarily those of SAFETY4SEA and are for information sharing and discussion purposes only.
John Wilson is responsible for the Technical Services of Asia in the American P&I Club's Hong Kong Office (SCBMCS / Hong Kong). Headquartered in New York, the American Club is the only P&I mutual domiciled in the Americas. A member of the International Group of P&I Clubs which collectively insures approximately 90% of the world’s tonnage, it offers full cover for Protection and Indemnity and Freight, Demurrage and Defense risks and has in recent years  grown  and  globalized  its  tonnage.  In addition to New York, the Club’s Managers, Shipowners Claims Bureau, Inc., has operations in Houston, London, Piraeus, Shanghai & Hong Kong.